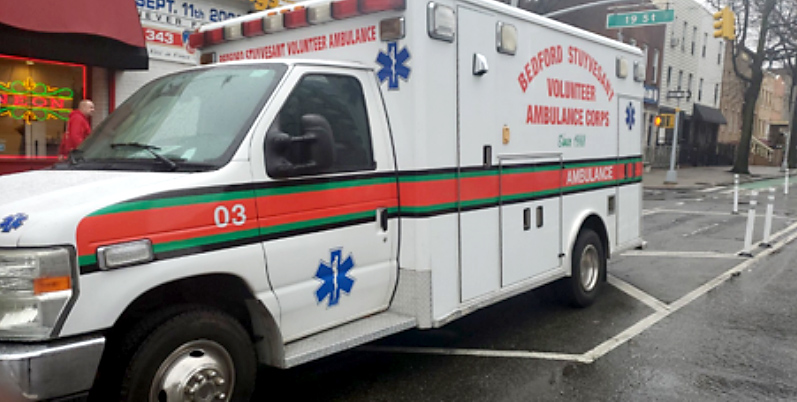 It was sent on March 17 by Antoine Robinson, President and Director of Bedford-Stuyvesant Volunteer Ambulance Corps (BSVAC), to the other three members of BSVAC’s Board of Directors:  Brooklyn architect Walter Maffei, Pastor Vernice Robinson, and lawyer Tamsin Wolf.  It was great news, indeed.  The used ambulance that BSVAC recently purchased can be put in service despite delays at DMV due to the coronavirus.

Antoine, who is nearing the end of a mandated 14-day isolation following on-job contact with a patient who later tested positive for coronavirus, is eager to see the new ambulance (pictured) in action.

Robinson, a 35-year old Paramedic with the Fire Department of New York, spends his nights on the job responding to 911 calls and saving lives.  He spends his days at the helm of the Bedford-Stuyvesant Volunteer Ambulance Corps (BSVAC), following in the footsteps of his late father, James (“Rocky”) Robinson, a towering, legendary figure known simply as “Commander,” who started BSVAC in 1988 with his EMT partner Joe Perez and the volunteer assistance of lawyer Tamsin Wolf.  Antoine, a toddler at the time, literally grew up at BSVAC; he saved a life for the first time when he was 15.  A year later he responded, along with his father, to the 9/11 World Trade Center attacks, where he helped save several lives; for two weeks following the attacks he assisted with recovery efforts at the site.  Antoine lost no time in becoming a certified EMT and then a licensed Paramedic, working with private ambulance services for several years before joining FDNY in 2016.

Like his father before him, Antoine toggles between his “day job” (currently a night shift) on an ambulance and his volunteer service with BSVAC, which has spanned more than 20 years and has included serving as an EMT Course Instructor and as Chief of Staff.   He seems to have inherited from his father a natural gift for teaching.  While still in high school, he became a Certified First Responder and he began teaching CPR and first aid to other students and teachers; he eventually provided life-saving CPR instruction to his entire high school.

Following the devastating earthquake in 2010 that killed tens of thousands in Haiti, Antoine was chosen by his father as leader of a contingent of volunteer healthcare providers sent to Haiti by BSVAC to provide medical services for those in the Port-au-Prince area who had not yet received any aid.  Antoine, already a Paramedic at the time, helped save lives and treated many patients, including the entire population of children at an orphanage who were in danger of losing their sight from a highly contagious eye disease; Antoine was able to successfully treat the children using a remedy he was forced to improvise because no standard medicines were available in Haiti following the earthquake.

After the death of Commander 6 months ago, Antoine seamlessly stepped into his new role as Commanding Officer and President of BSVAC.  The two remaining BSVAC Board members, long-term Directors Tamsin Wolf and Walter Maffei, brought Antoine on board as a Director and as President of BSVAC.  At the same time, Commander’s widow, Vernice Robinson, who had already been a vital part of BSVAC for decades as a volunteer EMT and administrator, also joined the BSVAC Board of Directors and was appointed as Secretary.